Globally, Share markets were down during the December 2018 quarter with the Australian share market falling 8.4% and the global share market index dropping 11.1%. Market volatility spiked - to the highest levels last seen in 2016 when the share market was dealing with a sharp decline in commodity prices.

“The stock market is the only market where things go on sale and all the customers run out of the store...”

Market sentiment can be fragile. What was once good news can become bad news and vice versa and, once the selling begins, it can acquire a life of its own.

There were three main reasons for the selloff.

The US is the world’s biggest share market. Some people say, “When the US sneezes, the world catches a cold”. Last year the US raising interest rates had major flow-on effects.

As US interest rates rise:

US interest rates may continue to rise in 2019 but probably not at the same pace as during 2018. Inflation will likely remain under control or even lower and this should limit the upward movement of interest rates in the medium term.

If US rates continue to rise in the short term, there will likely be negative implications for the Australian dollar unless the Chinese economy grows at a faster rate as higher commodity prices tend to push the Australian dollar upwards. This could result in further market fluctuations as seen in early 2018 and during the December 2018 quarter.

Tension between the US and China over ‘unfair’ trade policies turned into a saga of trading tariffs (meaning, over taxes placed on imports by each other), on billions of dollars-worth of goods.

The tariffs looked like they were beginning to cause an economic slowdown in China. It was unclear whether the US would continue to increase tariffs which further added to investor uncertainty.

There’s been a tariff ceasefire between the US and China and they are holding talks with a view to reaching a new trade agreement. Markets are optimistic, perhaps overly so, and this situation may cause some investor uncertainty this year.

Investors were worried that business profits, particularly in the US, had peaked and were headed lower as the economy slowed.

Technology is the biggest sector in the US market and lower growth expectations were triggered by Apple suppliers reporting lower sales which implied the iPhone was not selling as well as expected.

Lower profit growth is likely in 2019 particularly as US companies are not expected to get a boost from an extra tax cut, which they did in 2018.

However, profits are still expected to grow. This could result in a positive year ahead, particularly if concerns on trade and interest rates get resolved.

Losing money in the short term is not unusual when investing in the share market. The below table shows how this can change depending on the timeframe when exiting the market. 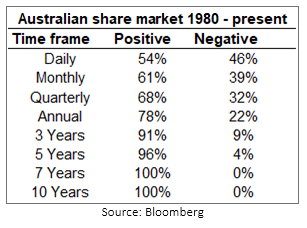 Losses can be buying opportunities in the long-run

On the positive side, when you’re saving for retirement and still contributing to your super, declines in the share market can represent a buying opportunity. A combination of your super contributions plus the dividends you receive from your existing super investments mean you can buy shares at a cheaper price.

Over time this value compounds into greater wealth for retirement. The below chart Shows that between 2003 and 2018 the price paid for Australian shares grew at 4.5% per year. However, if you had reinvested your dividends over the same period you would have earned almost 300% on your initial investment and achieved a growth of 9.4% per year. 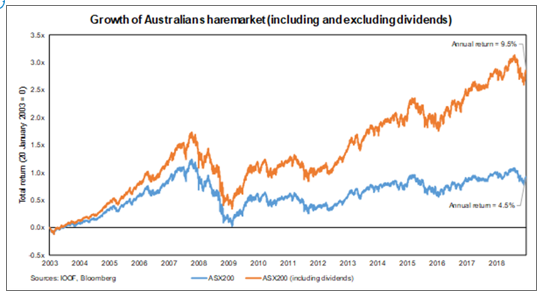 This chart illustrates the importance of investing for the long term and how reinvesting your income can achieve even greater returns.

Understanding your comfort with taking risk is key.

In terms of risk tolerance, how did the period at the end of 2018 make you feel? Could you sleep at night? Were you bothered by the news headlines or did you feel afraid?

If you were worried, it may be a good time to consider how aggressive your portfolio should be for your level of risk tolerance. These volatile periods present the truest tests for how we feel about risk and how much we can take.